A trek across the American southwest with a ne’er do well petty thief trying to escape his mysterious past, a celestial vagabond trying to rediscover hers, and the ruthless killer who is following them.

Grimmfest Says: In some respects, the new film from Jacob Gentry (THE SIGNAL, SYNCHRONICITY, BROADCAST SIGNAL INTRUSION) feels like a companion piece to Brad Baruh and Meghan Leon’s NIGHT DRIVE which screened at Grimmfest in 2021. Not just in the similar title and the presence of AJ Bowen (here also co-writing with Gentry) and Scott Poythress, but in the deft splicing of head-spinning sci-fi concepts into the classic film noir trope of the down-at-heel, out-of-his-depth fall guy whose life – and motor vehicle – are hijacked by a mysterious woman with an agenda, and far more knowledge of what is going on than he does. But while NIGHT DRIVE was a time-twisting TWILIGHT ZONE spin on paranoid, neon-drenched night-time L.A. Noir, NIGHT SKY draws inspiration from the dusty sunbleached Desert Noir of THE GETAWAY and such freewheeling psychedelic 70s road movies as ZABRISKIE POINT, alongside knowing nods to STARMAN, THE TERMINATOR and CLOSE ENCOUNTERS. Shot with gritty immediacy by Gentry, working as his own cinematographer, with a fine eye for the desolate, desert-dried locations, and benefitting hugely from Bowen and Brea Grant’s easy chemistry and sparky interplay, and the truly terrifying performance of Pothress as their implacable, psychopathic nemesis, it’s a weird, wild ride to an unexpected date with destiny, that will leave nobody unscathed. 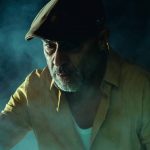