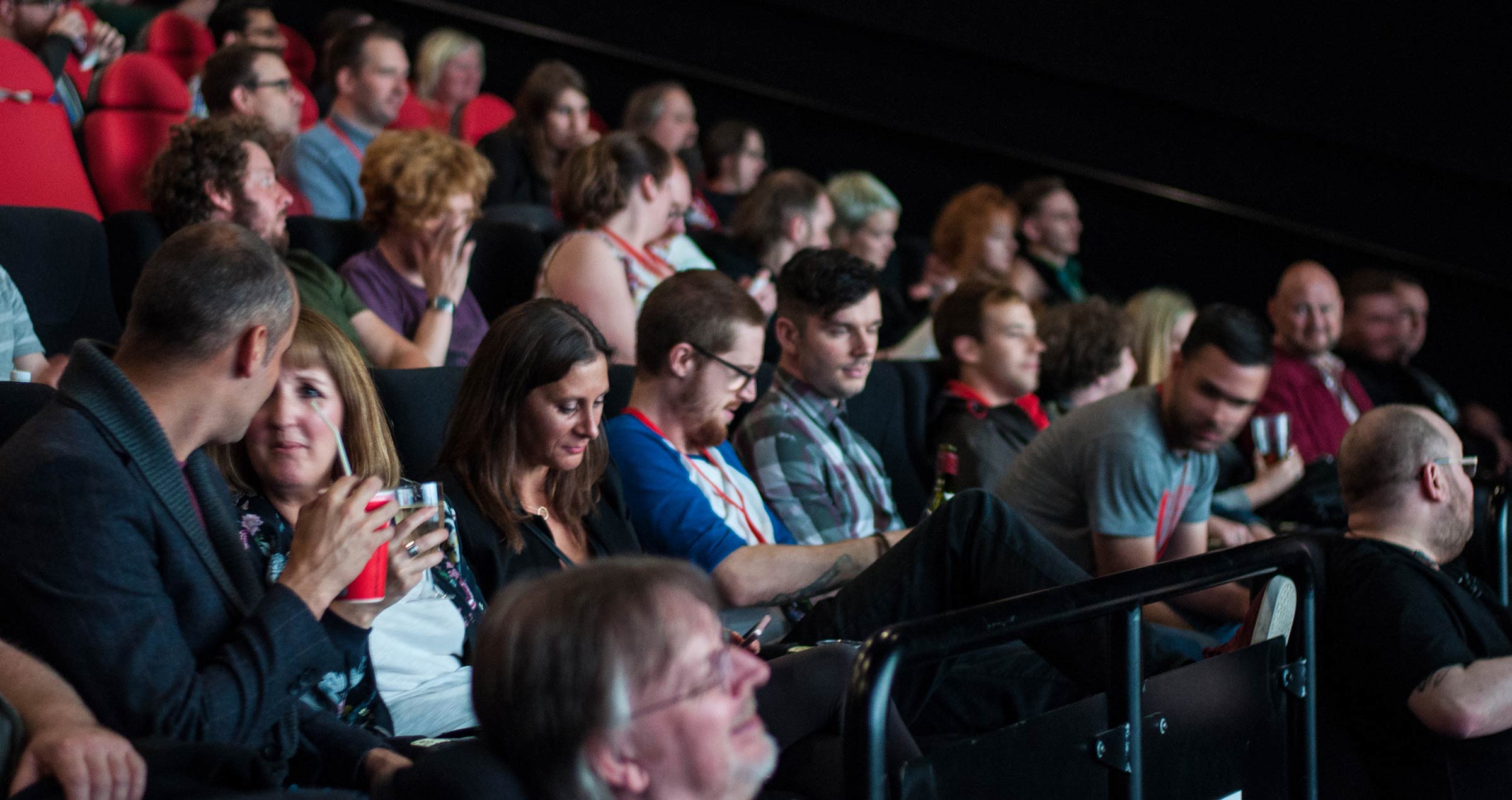 Now well into its second decade, GRIMMFEST continues to draw a huge community of genre film fans, press and guests to Manchester (UK) and was recently named as one of the best genre film festivals in the world by MOVIE MAKER MAGAZINE and by website DREAD CENTRAL.

The main festival traditionally takes place across the first weekend in October each year, and for the last number of years it has been hosted at the Odeon Great Northern in Manchester.

Grimmfest started way back in 2009. Film makers Rachel Richardson Jones and Simeon Halligan connected with Steve Balshaw, at the time Manager of Salford Film Festival, looking to explore ways to showcase their own horror movie (SPLINTERED) alongside other film makers’ work. The idea of a Halloween night of films developed, one which would highlight new horror movies. The concept quickly spiralled into a full blown three day event, encompassing brand new features and short films alongside a handful of classic screenings.

We needed a name. We liked the catch phrase ‘Its Grim up North’ but also liked the idea of a connection with the stories of the Brothers Grimm, so we styled ourselves GRIMM UP NORTH. The name stuck for a couple of years until fans started shortening it to GRIMMFEST and so that eventually became our mantle.

Over the years the main festival has been hosted at a number of different venues, including Vue Printworks, The Dancehouse theatre, and the Odeon Great Northern. On the way, weve hosted screenings at Stockport Plaza, Gorilla, The Lass O’ Gowrie, Albert Hall, John Rylands Library, MOSI, MMU, Manchester Cathedral and many more venues.

We have screened literally hundreds of movie premieres since 2009. Previous World, UK and regional premières have included: THE SADNESS, THE DEEP HOUSE, THE WRETCHED, LITTLE MONSTERS, 1BR, WHAT WE DO IN THE SHADOWS, THE BABADOOK, THE DESCENT 2, SINISTER, DEAD SNOW 2, COHERENCE, THE WOMAN, AMERICAN MARY, CURSE OF CHUCKY, BIG BAD WOLVES, JOHN DIES AT THE END, EXCISION, THE MACHINE, COCKNEYS VS ZOMBIES, THE DEAD, LET US PREY, VHS, THE ABCs OF DEATH, WHITE SETTLERS and many more.

Previous Remastered classic screenings include: THE WICKER MAN, NIGHTBREED: THE CABAL CUT, HELLRAISER, HALLOWEEN, THE SHINING, THE DEADZONE, THE DEVIL RIDES OUT, RE-ANIMATOR, THE HOWLING, TEXAS CHAINSAW MASSACRE, BRIDE OF FRANKENSTEIN, LA BELLE A LE BETTE, THE INNOCENTS, DAWN OF THE DEAD, SCREAM, E.T. and many more.

Grimmfest has quickly become one of the most prestigious fantastic film festivals in Europe. The festival takes place every October in Manchester, UK, with additional screening events taking place throughout the year. Want to dig deep into our Grimm past? Our archive will be added soon, watch this space.

Simeon studied film at the Royal College of Art. He has directed a number of feature films including HABIT, WHITE SETTLERS (The Bloodlands) and SPLINTERED. He is also a trained art director and production designer and has worked on numerous films and TV shows. Simeon runs Grimmfest alongside film producer Rachel Richardson Jones.

Steve’s past career has included everything from academia, to music journalism, to second-hand book dealing. But for the past twenty years or so, he has been working in various capacities in the North West Film Industry. He has staged guerrilla filmmaking projects, pop-up screenings, film-and-live-music events, and programmed and event-managed for various film festivals in the region. He has been a member of the Grimmfest Team since the very beginning, primarily as a film programmer and curator, although he also writes most of the festival programme notes.

Rachel is an award-winning producer, with a vast knowledge of raising finance and managing feature film and TV productions. She has developed numerous feature film projects, co-produced a number of international feature films, and produced four UK theatrical feature films. She set up the Festival in 2009 with Simeon Halligan out of shameless self promotion for their first feature Splintered. Over the last 14 years she has worked tirelessly behind the scenes to keep this very hungry beast’s head above the water. Her favorite genre film is “Night of the Demon” and does not like the taste of anchovies.

Naomi-Ruth joined us in 2020 as our social media manager. Favourite director is Alfred Hitchcock and she is usually found drinking copious amounts of coffee, knee-deep in analytics while herding her clan of small Grimmlins around.

Sean has been with the team since August 2021 and alongside managing the festival, he’s also the main writer for the website under the nickname The Reaper and was a guest liaison at the October 2021 live festival. Favourite film is THE THING and he aspires to have Kurt Russell’s immaculate hair and beard combo.

Sarah has risen through the ranks, starting as a volunteer in 2017 and she is now heavily involved with the programming side and assists with the running of the festival. Favourite film is JAWS despite a crippling shark phobia.