A team of paranormal investigators search a sacred Native American cave for clues in the unsolved disappearance of four Malibu teens.

Grimmfest Says: From the synopsis, this might sound like something you’ve seen before, and more than once, but don’t be fooled. Whip-smart Writer-Director Scott Slone knows precisely what he is doing; assembling a selection of familiar, much-loved genre tropes – and then sneakily shuffling the deck, to deal you something entirely unexpected. Assembled over a period of years, the film factors this lengthy creation process into its very structure, framing the earlier-shot found-footage sequences of the ill-fated teens within the context of a Paranormal TV show investigating their disappearance; a deft means of filling in history and backstory, but also of adding another self-reflexive layer to the narrative: this is a found footage movie about people investigating a found footage movie, with predictably unfortunate results. Throw in the fact that the story takes place on land sacred to Native Americans and stolen from them by murderous property developers a century ago, and that one of the characters is called “Jake Torrance”, and it’s clear that this is a very knowing film, filled with genre-savvy in-jokes and meta-textual mischief, which draws together its various disparate horror conventions, and bounces them off one another, re-imagining and re-energising them in the process, to deliver a ferocious old-school thrill ride, packed with brutally effective jump scares and dark, twisted wit; slyly self-aware, yet genuinely gripping and creepy, tense and unsettling. It’s been rocking audiences back in their seats in genre festivals across the States, and Grimmfest is delighted to be hosting the film’s international premiere. 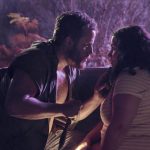 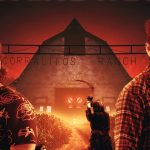