Following a traumatic domestic assault, a young woman is persuaded to join her friend’s therapy group on an isolated weekend retreat. But the remote mountain location forces them all to confront the various monsters of their pasts, testing to the limits their emotional resilience and ability to survive.

Grimmfest Says: Trauma is not something you can run from, but something you carry within you, wherever you go; something which impacts on whatever environment you find yourself in. The well-meaning, but dubiously qualified new age therapist of Berkley Brady’s satisfyingly complex and contrary debut feature fails to understand this idea until it is way too late, as she leads her mismatched group of patients and disciples ever deeper into the mountains, only to discover that there is something Not Right out there. Following on from a recent spate of what might be termed “Weirdness in the Woods” films, such as WOODLAND GREY or BRING OUT THE FEAR, in which the forest environment serves as a limnal space, more metaphoric than actual, DARK NATURE offers a far more concrete and real sense of place, even while tapping into its potential as metaphor. There are very real physical dangers here to go along with the psychological traumas. Shot on location in the same area of the Alberta Canadian Rockies used in PREY, the film plays at times like a subversive distaff spin on 70s films such as DELIVERANCE or RITUALS, in which a bunch of urban males strive to reaffirm their masculinity by some ill-judged excursion into the Great Outdoors. But if the film rejects such macho notions, it is equally dismissive of the therapist’s beliefs that such an encounter with Mother Nature will prove healing, and that her group will discover some common sense of purpose and sisterly support. Indeed, the various social, cultural, and class differences and tensions between the characters are emphasised from the start, and only grow more marked, as each starts to experience very vivid flashbacks and visions relating to their own particular source of trauma. Tapping into First Nation myths and legends about the region’s history as both a sacred place, and a place of sacrifice (Brady is herself of Metis descent), the film also draws on various backwoods tales of Bigfoot and the Wendigo, and event borrows a trick or two from William Girdler’s 1976 cult classic GRIZZLY, as the women’s various traumas assume ferocious physical form, and they must fight to prevent it from consuming them. A visceral creature feature as sustained concrete metaphor, this is an eerie, unsettling, and genuinely unpredictable dark parable about the rocky road to recovery. 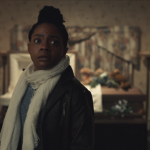 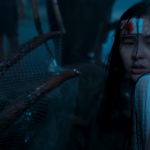