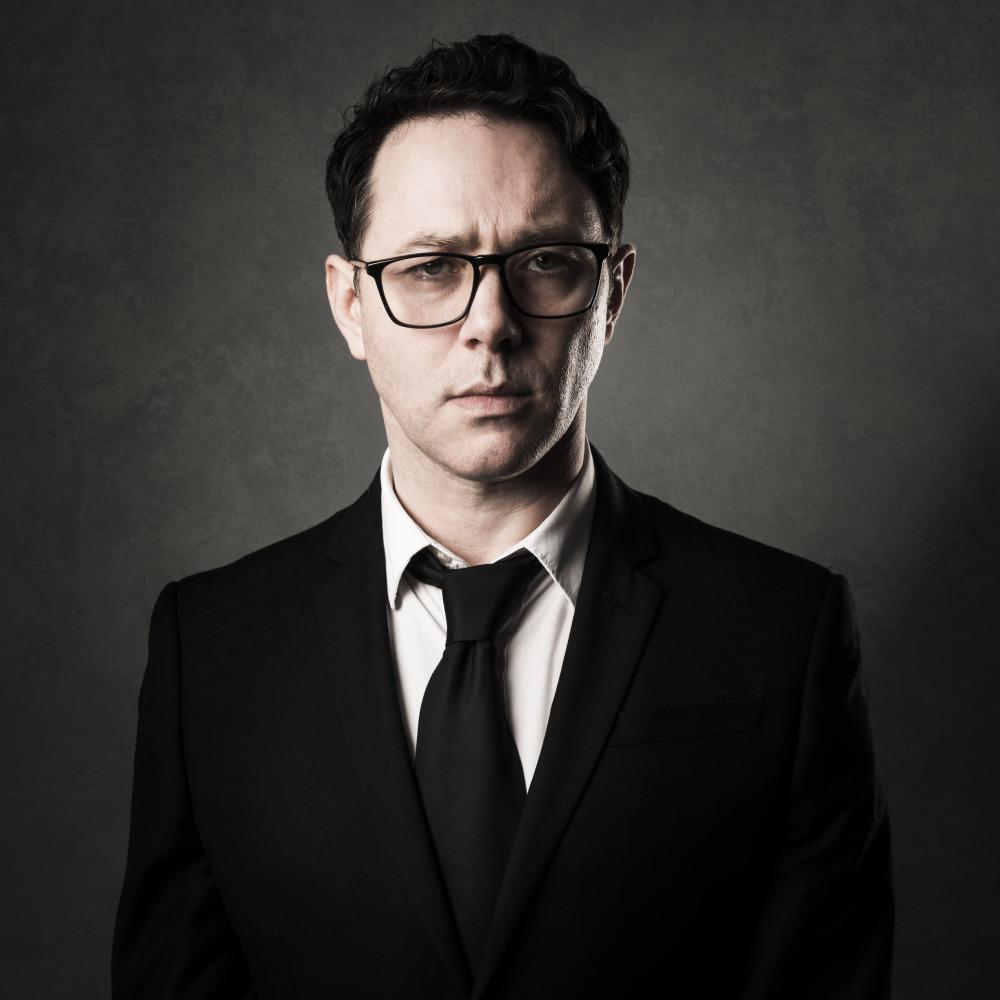 Reece joined us at our Monsters and Movies event to screen THE THING, talk about AMERICAN WEREWOLF and more!

It was an absolute honour for The Reaper to sit down with the man himself after spending years enjoying THE LEAGUE OF GENTLEMEN, PSYCHOVILLE and INSIDE NO 9.

Do you remember the first time you saw THE THING?

I do, yes. I think it was one of those films that was…I didn’t see it in cinema, I was too young to see it, but it was on video and I think it was probably a pirate video of it. Recorded from a Blockbuster and feeling like it was something that I shouldn’t have seen. I was sort of amazed and genuinely, it was a turning point as far as they can do this kind of thing with special effects. It was a step up from anything I’d seen before. It was the talking point at school and I just couldn’t believe some of the, the images and it absolutely burned its way into my mind. I’ve never been a massive monster movie fan really. It’s always more ghosts and psychological, but that to me did everything. Because it was a sort of Agatha Christie as well as being about the special effects as well. But the takeaway from THE THING when you first see it is the extraordinary in-camera effects.

I’d never seen anything like it before. It stuck with me for the rest of my life from that first view and just burned itself in.

So you might have answered this question there – why do you think THE THING after 40 years is still seen as a classic of the genre? Like the one that’s up there?

I think it must be to do with the sort of the document that is Rob Bottin’s makeup and special effects is so immaculate. I mean, you can’t better it now. That remake, that was the prequel to the.. it was the Norwegian camp. A lot of CGI and it just didn’t feel the same. It was an admirable idea. I liked the notion of it. I liked it a bit, actually.

I don’t mind that one to be honest.

THE THING is such a… it’s of its time. Yet it’s a brilliant film because every character is completely delineated and you care about them all very quickly and then they’re picked off and you get this great, ‘whodunnit’ really in the middle at the heart of it. So it’s a really well crafted, solid film in the way – it feels like a character piece as well. And yet the worst reviews you’ve ever read for anything. I think Cinefantastique ran the headline “Is this the most hated film ever made?” It’s extraordinary for me that it got bad reviews at the time, but it was really not well received.

It really wasn’t, and poor John was torn apart by those reviews.

So I gather. You would be, because you would think “well what have I gotta do then?”

You make it, you’re like ‘this is pretty good’. Then that reaction. So in your opinion, at the end of the film, who is the thing?

Is that based on anything?

No, not really. I just think if you were gonna do it then the obvious choice is it’s the other one. So that’s why I think the twist would be him.

It’s an interesting oblique ending. Good that it’s a sort of sour note. Neither of them are gonna live.

It actually is and possibly the perfect film.

I think so. It’s so authentic and when you hear about how they made it, they went six months before to build the set and then the snow came and just made it look like that camp. So it’s incredible. Brilliant.

Really incredible. So we’ll just take a little turn now. What do you think about the current state of British horror?

Oh, just British horror. Well, I admire any film that gets made because I know what it’s like to try to make anything and the work that goes into them. No one sets out to make rubbish. So it’s always admirable. I feel like films and anything that feels authored to me is the better way to go. I wonder whether in the process of making a film, part of that process knocks that part out because you can’t make something on your own if you haven’t got the means to do it. So it gets compromised every step of the way. I think there are some sort of exceptions to that and the people making their own.. author, vision, visionary films. But it’s just hard. I can’t think of things that I think ‘oh that’s really good’. I loved Rob Savage’s films, both of them. I really liked HOST and DASHCAM.

DASHCAM is another one that got bad reviews.

It was quite divisive, but really well done for sort of a found footage variation. He’s great. He knows what’s unsettling and what’s frightening and he’s done it very successfully I think. You’ve just got to have that passion to want to do it. But it is really hard.

When we do our things (with Steve Pemberton), we sort of…we replicate things that we think have affected us in our journey of watching horror and that genre. Certain things that we always think that’s effective that works. It goes back to DON’T LOOK NOW and THE WICKER MAN and these things that we continually take from. So you just got to hope those people still exist, and that they have got new ways of doing it. You don’t have to completely always go to the past for your scares, but… horror is a maligned genre anyway, so it’s hard to get things made. A bit like comedy, it’s very divisive as to what works and what doesn’t work. Everyone’s got a different threshold of what’s funny and what’s scary.

That’s very true. That was a good answer.

I did enjoy SMILE, that’s fresh in my mind. I saw it only two nights ago. I didn’t really know anything about it, so I was quite intrigued by it. There was some good scares in it. There was some really creepy bits. Then there are bits where I thought, you’ve spoiled it now. That doesn’t.. logically that’s a model to me. I was just thinking about the ending being, is it all in her head and is it a study in her mental health or is it this thing? This is obviously a spoiler for people to stop reading <laugh> I was like ‘oh, so are we meant to think none of this has happened?’. I didn’t quite know what to think of it. Maybe I’m stupid, but I didn’t get it. Didn’t get the ending in a way. Didn’t know which truth was the truth.

I liked it and I thought there was some scary bits. It’s very off. Very rare that you’re actually frightened in a horror film.

I love horror films but they never scare me.

No. So when something actually scares me or makes me think, or creeps me out or I think of it later and in bed unsettles me that’s an amazing achievement bevause that never happens. It’s funny isn’t it because I love them. I’m steeped in horror and enjoy watching horror films, but they very rarely do what it says on the tin, which is actually frighten me. What am I doing enjoying the genre that never works?

Do you think we’re just desensitized to it? To the jump scares? We know when they’re coming it’s like right onto the next one..

I do sometimes think we have to think of a new way of doing it and then you look at things like SCREAM that factor in the idea of the mechanics of the jump scare. It’s all so meta now, isn’t it? When something comes along that… even if it’s just an image or an idea or a moment in a film that sends a shiver down your spine. It’s really rare but you’ve gotta latch onto it. Because it’s like, what did they do there? It affected me.

It’s like gold dust. I just wanna say, I agree with your tweet saying that they should’ve released a teaser trailer for the next SCREAM on Halloween. That was a missed opportunity.

Totally. Yes. I’m excited to see it. I really liked SCREAM (2022) and I thought they did a very good job – in a world where they’ve done every possible meta comment on the horror film, what are they gonna do? It was fun to me that they looked at the toxic fandom.

Which you have no experience of I’m sure.

Do you have Shudder?

I highly recommend it – it’s one of those where you shouldn’t read anything about it. LIke they say to do with BARBARIAN. Maybe just read the logline and that’s it. That’s a Reaper recommendation for you right there.

Just watch it. You’re probably sick of this question – is there a horror film you would love to remake?

Oh, that’s not a question I’ve been asked before. I’m not sick of it. A remake. Oh my God. That’s hard though, isn’t it? Because anything that would appeal to me I would think, ‘well you can’t, you don’t want to remake it’. The only reason to remake this would be because it would just be nice to sort of see a new take on the stories. I would think there’s maybe room for it because it wouldn’t feel like you’re doing any damage to the original. But it would be a remake of DEAD OF NIGHT. The Ealing anthology film.

Ah I’ve heard of it but not seen it.

You’ve not seen it?! Oh my God. That would be the one I would quite like to have a go at. Just because you get a different way of doing the stories. You get a ventrioloquist dummy story, it’s good. It’s really good. There’s five stories in it and it’s got one of the best wraparound devices, in fact probably the best. There’s never really been one better because it doesn’t feel like the wraparound story is just an add on to join the stories together. It’s part of it. It’s completely intrinsically part of the whole and you never get that with anthologies.

You’d be happy to do a anthology film, obviously given that now you’re known for an anthology series.

Yes. I dunno why that would just… it was the question that you asked and I thought that would be a good one. But I really like the recent remake of THE INVISIBLE MAN.

Brilliant. That’s a creepy film. Imagine they’re filming just a sofa and moving the camera across to the other chair and moving it back again. It was so unnerving <laughs> because you knew he was there watching, but there was nothing there. It was brilliant and it was done really, really well.

I was not expecting too much from that film but..

It was great, wasn’t it? Properly horrible.

Really horrible. Everyone talks about the knife bit —

Of course, that is truly shocking. But some of the best bits were just when there’s nobody there, but you know he is there and the unsettling nature of that. Those shots just panning across and moving back.

I love the bit where it’s in the kitchen, she goes out, the camera stays and the knife gets taken. Your mind’s like, what was that? Then the pan goes off and that knife comes back later.

We’ll wrap it up there Reece, it’s been an absolute pleasure.