Each year, the BFI runs a high-profile nationwide ‘blockbuster season’ and works with organisations and partner venues across the UK to present big screen cinema events around a particular genre. This year, the focus is on horror inviting a fresh and inclusive take on the genre by exploring the five archetypes of horror monster: Beast, Witch, Ghost, Vampire and Zombie.

Grimmfest is honoured that the BFI have selected them as one of four key UK genre film festivals to host MONSTERS AND MOVIES, a newly commissioned event to celebrate IN DREAMS ARE MONSTERS.

MONSTERS AND MOVIES will be co-hosted by the MMU Manchester Centre for Gothic Studies and will take place across the weekend of the 19th and 20th November at the Odeon Great Northern in Manchester. The event will consist of a series of film screenings, in-depth Q&As and talks with some the most important creative minds behind a host of iconic monster movies.

We want to explore their passion for monsters in movies, the movies that inspired them, and the influence these movies have on contemporary society.

As one of the creators, writers and stars of INSIDE NO 9, PSYCHOVILLE and THE LEAGUE OF GENTLEMEN, REECE SHEARSMITH needs no introduction to horror and comedy fans. Reece will be screening either THE THING or AMERICAN WEREWOLF IN LONDON (the audience will decide on the night!) and discussing his career and monster movie influences with Mick Garris for Mick’s world-renowned POST MORTEM podcast.

Leonie Rowland will be talking to director NEIL MARSHALL (DOG SOLDIERS, GAME OF THRONES) about his seminal creature feature, THE DESCENT, and discussing its production with SHAUNA MCDONALD (SHETLAND, MUTANT CHRONICLES) who plays the lead character in the film. Neil will also be presenting a premiere screening of his brand-new action/monster movie THE LAIR.

Actor and director DOMINIC BRUNT (Paddy in ITV’s EMMERDALE) will present a premiere screening of his brand new comedy-horror werewolf movie, WOLF MANOR. He will be joined by film maker ASHLEY THORPE (BORLEY RECTORY) to talk about making monster movies and creating monsters for movies.

Dr Sorcha Ni Fhlainn will be talking to prolific US director, writer and producer MICK GARRIS (Masters of Horror TV series, Stephen King’s THE STAND) about his extensive career in the horror genre, which has seen him work with everyone from Stephen King to Clive Barker and just about every seminal horror director of the late 20th century. Mick will also be joined by actress Alice Krige to present a 30th anniversary screening of his movie SLEEPWALKERS.

Dr Linnie Blake will be talking to Director CORIN HARDY (THE NUN, THE HALLOW, GANGS OF LONDON) about how he reimagined ‘fairy mythology’, combining folklore with grounded biology to create a new monster in his movie THE HALLOW. Corin will also be presenting a special screening of the film and sharing some of his never-seen-before concept and creature design work from both THE HALLOW and THE NUN.

And we are yet to announce our surprise movie and guest! Watch this space for more info.

SHE WILL + Charlotte Colbert and Alice Krige talk 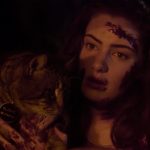